The last of 84 offshore wind turbines was commissioned today (15 May) at Beatrice, Scotland’s largest offshore wind farm, which has been completed on time and under budget after three years of construction.

The final 7MW Siemens Gamesa turbine was installed in the Outer Moray Firth, around 13km off the coast of Caithness, bringing the site’s total installed capacity to 588MW – enough to provide clean, low carbon energy to over 450,000 homes.

Jim Smith, Managing Director of SSE Renewables said: “Completing the offshore construction at Beatrice is a testament to the capabilities of SSE Renewables and our project partners. Delivering one of Scotland’s largest ever private investments on time and under budget is a fantastic achievement given its complexity and we would like to thank everyone who has helped us make the project a reality.”

As the Beatrice’s majority shareholder, SSE Renewables led on the construction process and will manage operations and maintenance from a new base in Wick, having invested over £20m in the coastal town to redevelop the harbour front and renovate two 200-year-old Thomas Telford buildings that will soon become home to up to 90 long-term members of staff.

BOWL engaged constructively to maximise the opportunity for economic benefits and contracts were placed with companies and businesses across the supply chain resulting in over £1.1bn construction spend in the UK and around half of this in Scotland. This included CS Wind’s Machrihanish factory for turbine towers, Global Energy Group’s Nigg Energy Park for marshalling and turbine pre-assembly, Bi-Fab in Fife and on Lewis for jacket foundations and piles, Babcock Marine in Rosyth for the Offshore Transformer Module topsides, JDR Cables in Hartlepool for array cables and Siemens Gamesa in Hull for blade manufacturing.

Christina Grumstrup Sørensen, Senior Partner at Copenhagen Infrastructure Partners stated: “Achieving this final milestone in the construction phase of Beatrice in a safe and timely manner is a result of the excellent performance of the project team and the good cooperation with competent suppliers. We are very pleased to see all 84 turbines feeding green, renewable electricity into the grid. This is a major milestone in our offshore wind strategy, where we are developing, constructing and operating offshore wind projects globally.”

Guy Madgwick, CEO of Red Rock Power Limited, said: “The completion of Beatrice signifies the monumental strides the Scottish offshore wind industry has made in recent years, and marks the beginning of a new chapter as we prepare to bring 30GW clean and affordable wind energy to consumers by 2030. Many of our team were responsible for securing Beatrice in the 2008 leasing round, and so after more than 10 years, we’re delighted to see the development finally come to fruition.”

Jim Smith added: “SSE Renewables has been involved in the offshore wind industry for 15 years now and we will take the learning from Beatrice and apply it as we now look to develop and deliver our pipeline of over 7GW offshore wind projects across the UK and Ireland.

“At the beginning of May, the UK Government’s Committee on Climate Change determined that Britain would need to go faster and further to decarbonise. Beatrice is one demonstration of how SSE Renewables knowledge and expertise in developing, delivering and operating renewable energy assets can contribute to a zero-carbon world at scale.”

Business Secretary, Greg Clark said: “The offshore wind sector is a UK success story, and the completion of this windfarm is further evidence that the UK is the best place to invest in renewable energy.
“In working with the government, the sector has shown it can deliver ever larger projects at ever lower costs while creating skilled, fulfilling, well-paid jobs. Our ground-breaking sector deal, signed earlier this year, will drive £250 million into businesses in the UK offshore wind supply chain – keeping the UK at the forefront of this vibrant 21st century industry.”

Scotland’s Energy Minister, Paul Wheelhouse, said: “The last of the 84 turbines being installed on Scotland’s first commercial scale offshore wind farm is an important landmark for offshore wind in Scottish waters and a fantastic achievement for SSE and its project partners.”

“In 2017, the Scottish low carbon and renewable energy sector supported over 46,000 jobs, and generated over £11 billion in turnover and, by the end of 2018, some 10.9GW of renewable capacity had been installed. This represents great progress and the offshore sector will make a growing contribution to mitigating climate change, and we are committed to ensuring that Scotland maximises the economic opportunity of an accelerating transition to a low-carbon economy.

“Projects like the 588MW Beatrice offshore wind farm will add to what is a growing industry for Scotland, and the project has already supported key supply chain businesses in Scotland, such as Global Energy Group, CS Wind and BiFab, among others. Projects such as this also have great potential for further economic benefit and job creation. The Scottish Government is determined to ensure the supply chain and economic benefits of this industry will be fully realised as we see consented sites built, and take forward further licensing opportunities to develop offshore wind in Scotland’s waters.”

Scottish Secretary, David Mundell said: “I am pleased to see the completion of the Beatrice offshore wind farm, the largest of its kind in Scotland – providing enough electricity to power over 450,000 homes.
“The UK Government is committed to innovation in renewable energies including wind projects in Scotland. In March we launched the offshore wind sector deal, aiming to deliver a third of the UK’s electricity through offshore wind by 2030. This is a fantastic example of unlocking that potential while also providing an abundance of quality and highly skilled jobs for the future.”

Global Energy Group chairman, Roy MacGregor, said: “At Global Energy’s Port of Nigg, we are very proud to have played our part in the delivery of SSE’s first Scottish offshore wind farm, which is situated in the deepest water yet, for this type of development.

“This project justifies the huge investment we have made into our facilities and we are proud of our professional workforce who fully embraced the technical and operational challenge of successfully delivering our first major offshore wind project. We are pleased that our client Siemens and the project owners BOWL, have widely endorsed our good performance. We enjoyed an excellent working relationship with them both and now that we have proved our capability to deliver, we look forward to further contract awards in support of renewable energy developments around the coastline of Scotland and beyond”. 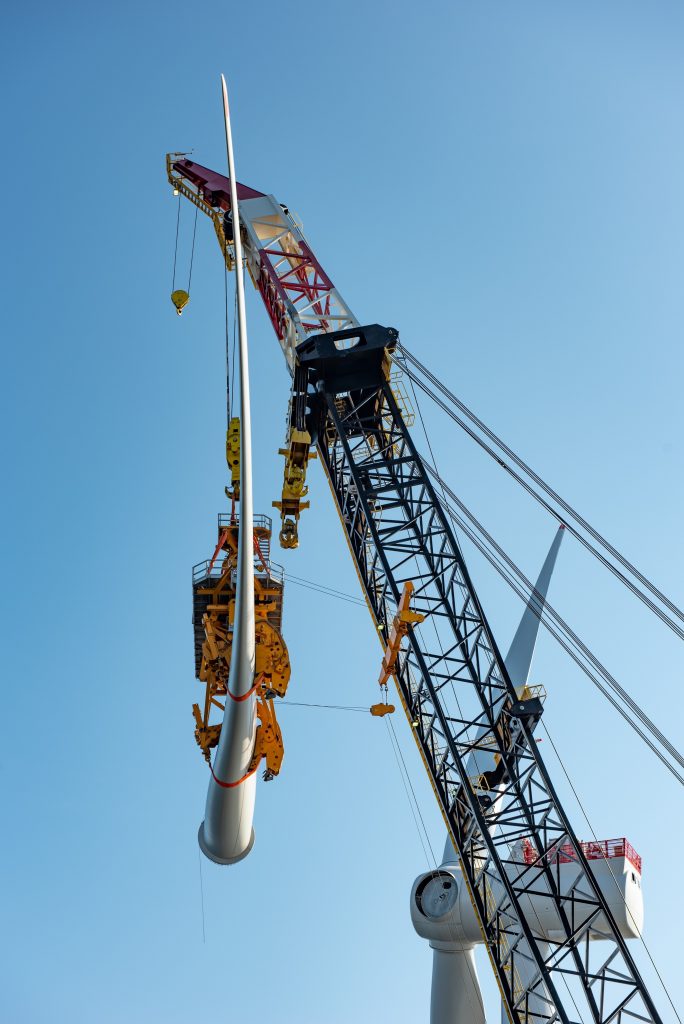