The Benbrack onshore wind farm project in Dumfries & Galloway, South West Scotland, is currently in late-stage development and not yet in construction. Located just south of the East Ayrshire border, approximately 6 km north of Carsphairn and east of the A713, the wind farm was first proposed in 2012 and secured planning consent in 2017 which has since been varied to further optimise the project.

Red Rock Power acquired full ownership of the project in February 2021 and the Edinburgh-based team are currently reviewing existing development plans. The wind farm has a potential capacity of around 72 MW and consent for up to 18 turbines however the detailed design including height, number and location of wind turbines, as well as a construction timeline, are yet to be finalised.

The team will look to engage with local stakeholders in the coming weeks and months as we finalise this process and prepare for the next phase. Should you have any questions about the project in the meantime, please contact us by emailing Community@redrockpower.co.uk.

*The application boundary does not represent the actual footprint of the wind farm, rather the area of land to which the planning permission and related scoping studies apply to. While the number and location of turbines are still to be confirmed, the wind farm site – located in the north of the boundary – will be considerably smaller. 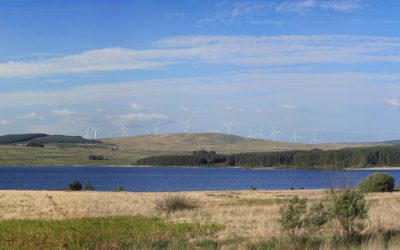